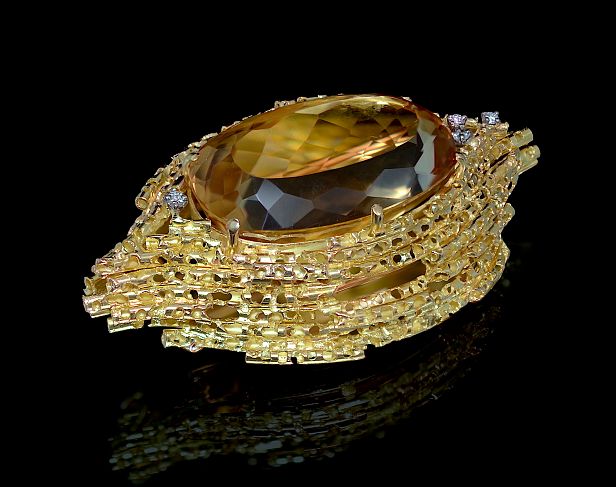 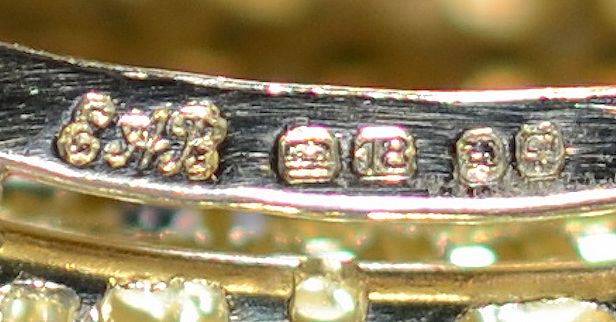 This magnificent brooch is by the British jeweller Ernest Blyth.

It is made predominantly in 18ct yellow gold in an elongated oval shape.
It comprises a series of layered textured & polished 18ct yellow gold irregularly perforated tubes.
These tubes support & frame a large oval claw set yellow citrine.
Three small round diamonds set in 18ct white gold claws are positioned at one end of the citrine and one small round diamond also set in 18ct white gold claws at the other end.

There is a double pin, one of which fits into a trombone fastener.
The brooch is hallmarked by the London Assay Office for 1971 and 18ct gold and bears the sponsor's mark "EAB" for Ernest Blyth.

Weights, colours & clarities of the stones are estimated as the stones have been examined and measured in their settings. Where the stones carry an independent certificate this will be indicated.

Ernest Blyth
(1939 – 1995)
Ernest Blyth started his career in 1957 with a part-time course at the Central School of Arts and Crafts, followed by an apprenticeship in assaying at the London Assay Office of the Goldsmiths’ Company.
His first abstract brooches were shown in the International Exhibition of Modern Jewellery in 1961, and were acquired by the Goldsmith’s Company for its Collection.
He joined H.J. Company Ltd where Andrew Grima was the lead designer.
In 1962 he pioneered batch production silver jewels inspired by the Danish designer Henning Koppel which were sold by Ivan Tarratt Jewellers in Leicester
In 1966 he opened a joint workshop in Shepherd Market with the jeweller, Frances Beck, who had also worked for Andrew Grima.
Blyth & Beck won two De Beers Diamonds International Awards.