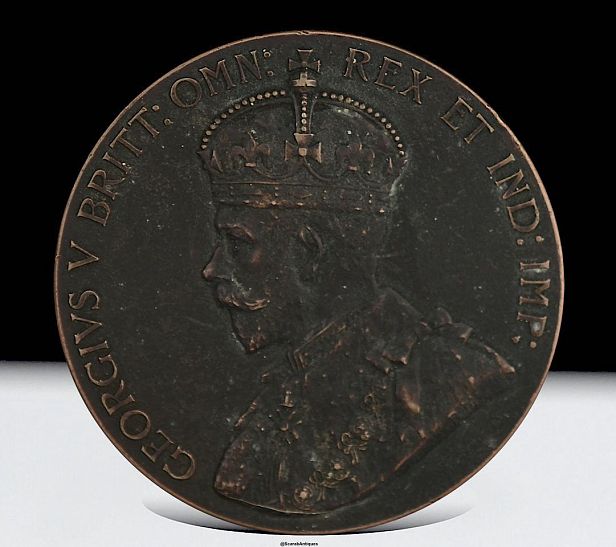 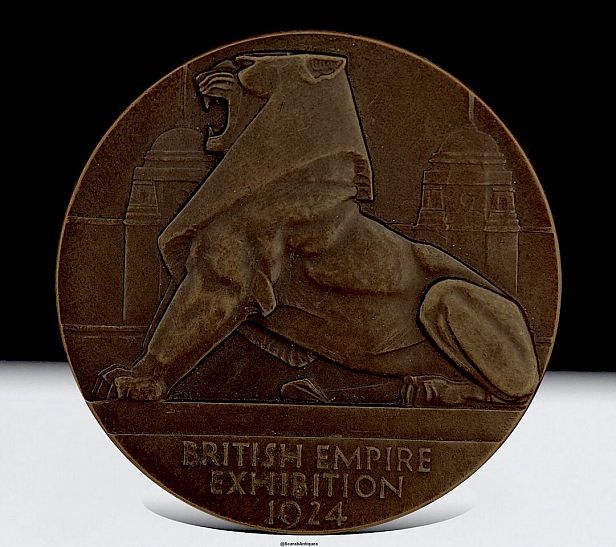 This medal was struck to commemorate the 1924 British Empire Exhibition. On the obverse is an image of King George V and on the reverse is the iconic image of the roaring Wembley lion with the towers of Wembley in the background with "British Wembley Exhibition 1924" engraved below. . The reverse is signed "PM" for Percy Metcalfe.

Percy Metcalfe
(1895-1970)
English artist sculptor & designer.
He studied art in Leeds, and in 1914 attended the Royal College of Art London. He produced many designs for Ashtead Pottery between 1923 and 1936. One of his noted sculptural works is the bronze war memorial in Durban South Africa.
Percy Metcalfe was an accomplished designer of coins. His designs (with some modifications) were used for the reverse and obverse of all coins issued by the newly founded Irish Free State, although he was an Englishman. He undertook the work for the Irish Currency Commission of 1926, which was chaired by the poet W. B. Yeats. The coinage depicted various farm animals, with a harp on the obverse. In 1938 he re-designed the obverse harp for all the coins to improve the reverses of the Penny and the Half Crown.
Metcalfe also designed the obverse of the 1935 Australian florin, showing George V. It was his only design for the Australian Commonwealth series, although the same design was used on Rhodesian, New Zealand and Fijian coinages.

He also designed an image of a crowned George VI used for the obverse of many British and colonial coins including the 1937 Canadian unofficial pattern dollar. A similar image was used for the Australian Service Medal in 1945 (NU 18701).
In 1939 King George VI and Queen Elizabeth visited North America for which the Royal Canadian Mint struck three series of commemorative medallions. The obverse, featuring the conjoined profiles of George VI and Elizabeth was designed by Percy Metcalfe; it was also used on the 1937 British Coronation Medal.