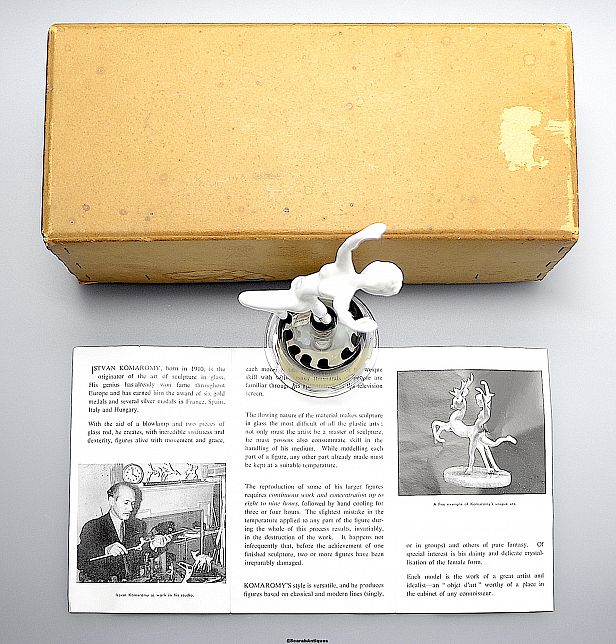 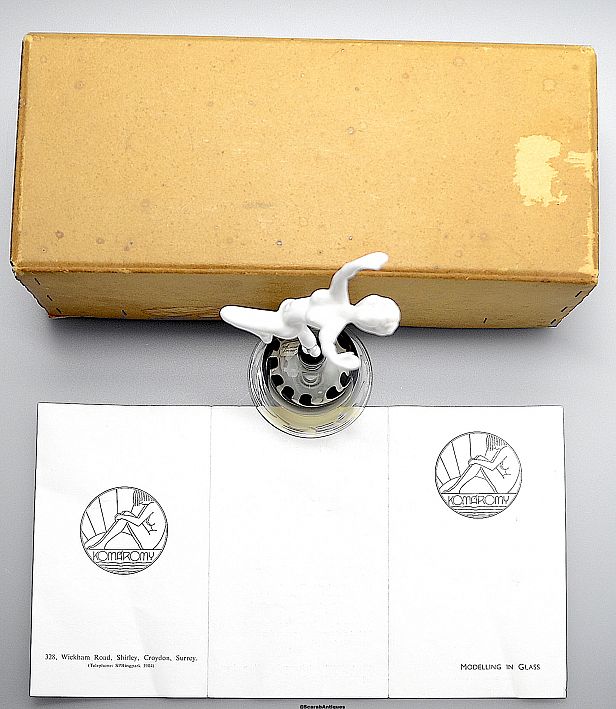 I love these delicate Komaromy lampwork dancers. This one is typically in white opaque glass and stands on one leg arching her back with raised arms and her head thrown back. She stands on a small black glass ball above an upside down bell shaped stand decorated with white & purple/black decorations. There is an oblong silver label with Istvan Komaromy's signature on the base. It is accompanied by a Komaromy original illustrated small brochure. C1960s.

Istvan Komaromy
Born in Dusseldorf, Germany 1910, but grew up in Budapest studying science at the university.
He started making scientific glassware to sell to his fellow students which lead on to him making glasses. and was persuaded by his Univerity professor to give up scientific studies and become a glass artist.
Komaromy traveled to European exhibitions where he won a number of gold & silver medals.
At the World Fair in 1931 Mussolini, described Istvan Komaromy as "the Michelangelo of glass".
All of his glass pieces were made using a Bunsen burner from either solid or tubular coloured or opaque glass rods.
Iin the 1930s stvan set up a glass studio in Budapest with his sister making glass sculptures but his involvement was brief.
In 1935 he visited Britain where he met and married and moved to London in 1937. In 1939 he set up his glass works in Shirley Croydon.
He produced his famous “dancers” but also produced animal sculptures goblets decanters vases and other items.
Early pieces were not labeled but silver labels with his signature were used from the early 1960s. Early pieces were either standing on a glass ball or on a wooden stand whilst later pieces were on marble stands or stood alone. He taught at the Wimbledon School of Art and gave visiting lectures at Slade College in London.
He numbered members of the Royal family amongst his clients and his work is in the archives of the V&A, the Pilkington's Museum of Glass & the Museum for Applied Arts in Budapest, Hungary.
He died in 1975 aged 64.